17 Buses Stationary on the High Road on Friday Afternoon 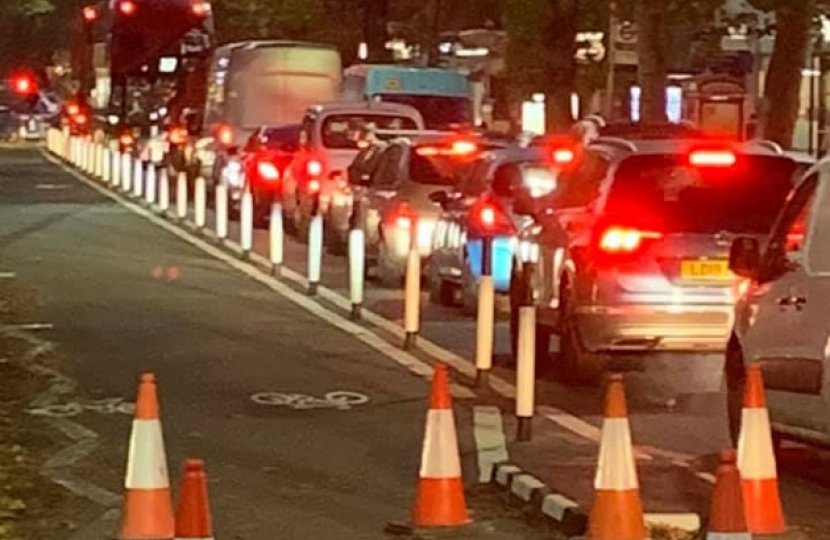 Hounslow Council traffic schemes including Streetspace, Turnham Green Terrace, Devonshire Road, Low traffic neighbourhoods and other schemes have brought Chiswick traffic to either a crawl or long periods of being stationary. Seventeen buses were stationary in the High Road on Friday afternoon trapped in a solid traffic jam between Acton and Chiswick Lane.

Businesses overtly wither and the Council neither listens or responds - locked into frightened silence by the vociferous anger of residents being delayed or because of inadequate signage, being fined.

One formerly successful business in Devonshire Road (DR) has seen a 40% drop in business since the inception of the new traffic scheme. They have made 5 staff redundant and another two are furloughed. They find making representation to the London Borough of Hounslow (LBH) Leader, Cabinet member futile and cite the number of empty premises in DR.

Bus lanes have disappeared in favour of cyclists despite the former head of LBH Traffic reminding us that a bus carries 60 odd people currently 30.

Challenge from Conservative and Labour Councillors and others

We now have a possible Judicial Review initiated by ‘One Chiswick’. In addition I have, with the help of seven other Councillors ‘called-in’ the council Streetspace Programme cabinet paper which puts that paper on hold. Eight other labour Councillors have done so too on the grounds of ‘inadequate consultation, inadequate evidence to make a decision and equalities issues’- an unprecedented course of action. Our Overview and Scrutiny Committee will hear both these call-ins and can advise the Cabinet to amend or even withdraw this report. The cabinet though can ignore their request.

A Bedford Park resident Mr David Kerr has now persuaded the local government Ombudsman to investigate. David says,“ Due to a series of unsatisfactory responses from the officers of LB Hounslow I initiated a complaint to the Local Government Ombudsman who has now confirmed that an Investigation Team will be deployed to examine the processes and decisions that led to the Council implementing measures to restrict vehicle access and parking on Turnham Green Terrace and Devonshire Road which I consider to be disproportionate in the light of Government guidance and funding and which deny me my reasonable right to choose how I wish to travel around the Chiswick area depending on my journey purpose, who I travel with and variable weather conditions”

We received a paper on the Councils Medium Term Financial Strategy. I asked a question about earmarked reserves totalling £30m ‘earmarked reserves’ that I established of this amount £24m was not committed in any way.

The report also mentioned ‘the approved restructure of Human Resources and Organisational Development’… ‘which results in ongoing costs in excess of their base budget of £0.7m. The unshown excess is £685,000 nearly a 100% increase! Why wasn’t this sum shown?

During my research I revisited earlier finance papers I noted that the window cleaning bill to clean our new Town Hall is now £500,000 per year.

Cllr Curran frequently mentions the Hounslow Pound referring to his ambition to engage local companies to supply the council’s requirements. I’m therefore shocked to discover that we engage Amazon Web Services who host some of our servers/systems/infrastructure. I’m surprised given the IT skills in Hounslow that a local contractor couldn’t be found.

Please see the Agenda on this link

Amongst those attending is our Head of Traffic with his Cabinet member Cllr Khan together with TfL officials. There’s an item on Community Engagement too. Instructions on how to join the meeting and ask questions are set out in the papers.

I’m a member of the schools Governing Body. We remain in frequent contact with the Head Teacher Laura Ellener and get a weekly bulletin from her which is most informative.

I’ve conducted a Zoom meeting with the senior SENCO teacher and her line manager discussing and sometimes challenging contemporary issues in both monitoring and providing the complexity of the SEND provision to pupils via a number of methods. Their commitment together with other staff members in these difficult circumstances is obvious and worthy of high praise.

Laura tells me attendance in Hounslow schools is above the national averages which is very pleasing and demonstrates what a good job the schools are doing to ensure that parents, children and staff feel as safe as possible during this time. Chiswick Schools attendance is 93.8% which is very high in the current context. Although some children and staff have had to self isolate lessons have continued with staff delivering these from their front rooms and children logging in from home using technology to support their learning. The school is very pleased that they have been able to remain open during this latest national lockdown and this is very important for students’ wellbeing and also academically.

Fruition Properties have advised that Corney Reach Way Limited will be commencing the site set up and demolition of the former bar and café Pissarro’s on The River, Corney Reach Way, Chiswick, London on Monday 16th November, under the Prior Approval notice reference 01689/D/DEM2. The demolition works are scheduled to be completed by Monday 1 st February 2021.

The destruction of this café bar is a great loss. A number of well known chefs bid for this valued community asset (although we were unable to get this definition accepted by Hounslow Council) without success. Flats are more profitable.

The recreational section of The Thames Strategy says café bars adjacent to the river are most appropriate as they allow people to socialise and enjoy the beauty of the river scenery.

On the 24th November we meet with our professional advisors who have been conducting a ‘value engineering’ review of the proposed new bridge. Currently we are meeting our projected time schedule for construction.

The fountain is owned by The Drinking Fountain association who made a generous donation to the fountain’s refurbishment have reservations about our proposals to prevent further vandalism. Unfortunately their architect is on furlough leave so we await his return. Under Covid rules all drinking fountains have to be currently turned off.