Council Not Listening on Street Lighting, Climate and Diversity 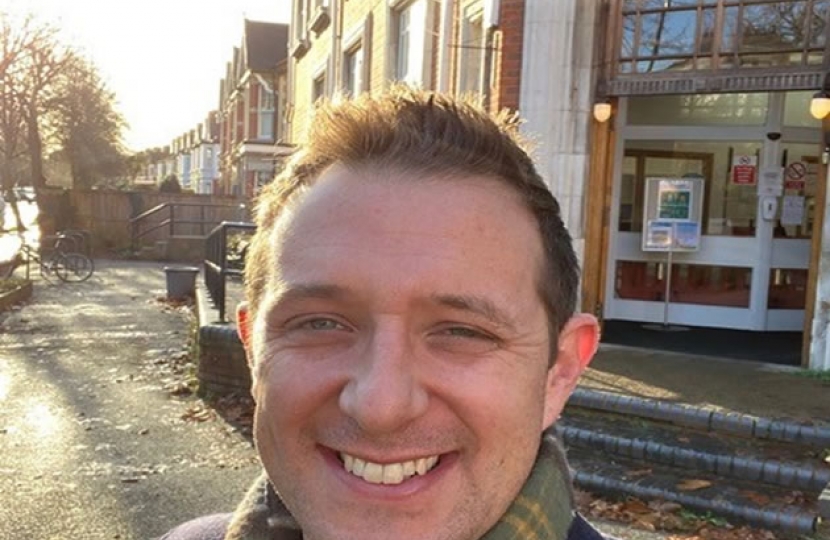 Borough Council meeting – a lesson in how not to listen

There is always a sense of anticipation before full borough council meetings. We know the agenda but not how the meeting will go beyond the fact that the Labour group will pounce on us, the ten councillors in the Conservative opposition group, at every opportunity, relevant or not.

The evening starts with us all gathering in our room, several of us with heads down as we run through how we will introduce or second motions and/or contribute to discussions on the major papers being presented, or finalising supplementary questions to ask when our main questions have been answered. It’s a mixture of warm chumminess and serious concentration then a rush to be in our seats before the mayor's procession behind the mace. 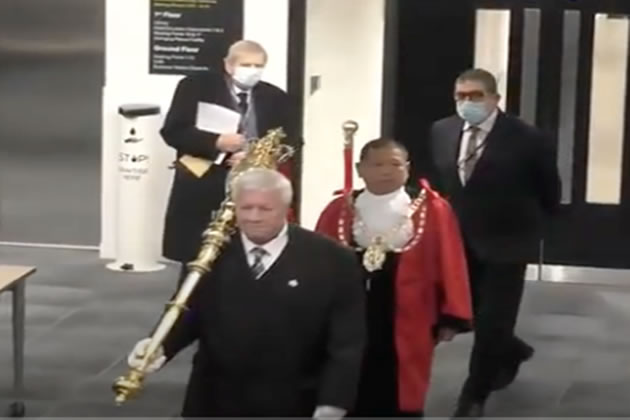 The Mace Bearer, The Mayor and the Chief Executive

Because the borough council meeting date had been delayed by a week, after the very sad death of Labour councillor Javed Akhunzada (Bedfont Ward), neither Cllr Gabriella Giles nor I could attend. Rearrangements were made by the Leader of the Opposition and his team about who would propose and second what had taken place during the meeting so the two of us – Gabriella and I – had to catch up afterwards on the council's YouTube channel.

Listening to the many tributes to Cllr Akhunzada was moving and watching the one minute silence in his memory brought a real sense of respect and reflection. Unfortunately, when council business was resumed, Hounslow Labour soon descended into its usual and predictable attempts at point-scoring, interspersed with our serious contributions. First to cause controversy was the accuracy of the minutes. How Labour manages to turn what should be a simple admin task into a major party-political affront is beyond imagination. Accuracy is not their strong suit.

In their usual forensic way, my Chiswick Homefields ward colleagues Cllr Gerald McGregor and Cllr John Todd had been through the council's medium term financial strategy (MTFS) and the treasury management mid-term report with the Hounslow Officers and both were determined to expose Labour's two biggest weaknesses – its inability to balance the books and its inability to explain why.

"The game's up for the leader tonight," Cllr Todd said at the start, noting that the council has yet to consider its council tax strategy for 2022 and which it must do by February. Cllr Todd had unearthed the council's salary bill. In 2017 it was £74.5m; currently, it's nearly £90m. Where's that money gone and how are you going to pay for it? he asked. Cllr Guy Lambert's Lampton empire shows another £2m loss. Coalo, completely on its knees, requires another £1.1m. With so many holes in the budget, it's no surprise that Labour has already said that it cannot rule out increasing council tax next year.

Now not being able to rule it out is code for “it's definite” so an image sprung into my mind of leader Cllr Steve Curran reaching for a steaming jug of gravy and pouring out our money.

Street lighting – Labour refuses to improve safety on our streets

MOTION on PROTECTING WOMEN AND GIRLS FROM STREET ATTACKS IN HOUNLOW

“Attacks against women and girls in our neighbourhoods are at an alarming rate. Given the recent tragic events in London, which have impacted on the safety and security of women across the region, it is manifestly reasonable, appropriate, and timely to reinstate street lighting to a level that enhances safety and confidence through the hours of darkness across the borough. The current lighting levels of streetlights are insufficient and cause too many ‘blackspots’ on our streets.

"Therefore, this Council directs Hounslow Highways and the relevant departments now act to ensure lighting levels are increased and adequate to allow for proper vision and safe passage in the darker hours.”

It was truly shocking to hear deputy leader Cllr Lily Bath dismiss lighting problems in Chiswick because she's had requests for lighting to be turned down. The word uttered under our breath most often when Cllr Bath contributes to discussions is "patronising".

I suspect all in our Chiswick team have had requests from residents for lighting to be improved. Our roads are full of dark spots and the result of dimming and trimming (reducing lighting levels, reducing the number of hours lights are on at the highest level) has meant many people stay at home rather than go out to enjoy our night-time economy. We've asked every year since 2018 for lighting to be improved; Labour isn't listening.

Despite Chiswick councillors raising a number of case work points about inadequate lighting in our community, Hounslow Labour voted down our proposal to improve street lighting.

Perhaps it's because Chiswick is so leafy, with lamp lights in the tree canopy, or trees breaking up the flow of the light causing these dark spots. Or is it because we have good public transport links with many routes home on foot from rail stations, tube stations and bus stops – and don't drive home? Or was the request from a resident with a streetlight shining into a bedroom window, not down on the road (requiring adjustment to the lamp angle, not reduced lighting)? Regardless, it is not appropriate to belittle residents who need brighter lighting at night so they can walk home with confidence, with or without slithery leaves and uneven pavements along the route.

MOTION on UNDERSTANDING THE NUMBERS AND MIX OF THE VARIOUS COMMUNITIES IN HOUNSLOW WITH A VIEW TO PLANNING, SUPPORTING and DELIVERING SOCIAL POLICY

“It is important we recognise the diversity of our Borough, and more importantly understand the needs of residents from all backgrounds. Without enough data and knowledge of our residents, we cannot serve our neighbourhoods and communities properly.

Labour again turned away from the need to provide more targeted services and support to the wide variety of communities and neighbourhoods in the London Borough of Hounslow. Chiswick councillors raised a number of reasons including protecting transitory workers from exploitation and the need to remember the very strong links going back two centuries between the UK and the communities of Central and South America.

Hounslow Labour voted down our proposal to improve our knowledge and support to this important growing community.

Community Support – Labour capitulates when faced with the results of COP26

“COP26 was a momentous conference and a momentous occasion for the UK to host the presidency this year in Glasgow. Her Majesty’s Government, under the Presidency of Alok Sharma MP, did a fantastic job in organising and hosting this conference which saw world leaders, voluntary organisations and NGO’s come together from across the world to discuss one of the world’s biggest challenges – climate change.

"The Conference has agreed a new deal leading on from the Paris Agreement: The Glasgow Climate Pact. This Pact offers a breakthrough to tackling the climate crisis by agreeing to phase down the use of coal, reemphasising the net-zero carbon emission targets, and ensuring there are climate financing programmes for adaption of this deal.

"Therefore, this Council resolves to re-emphasise its commitment to tackling the climate crisis, especially in the pledge to become a carbon neutral authority by 2030, and provide regular updates on the levels of carbon emissions throughout the Borough on a sixth month basis and for the authority to adopt a programme of carbon in-setting and officially endorse the Glasgow Climate Pact.”

This was just sad, with the Leader of the Council Steve Curran commenting that the Labour Group would never complement or support a Conservative Government when he had earlier announced the very high level of Government Financial Support for the Council’s spending Programme including the retail voucher using taxpayer supported Whitehall grants for Covid 19. QED!

You can listen and watch the meeting here.

Retail e-voucher scheme – have you spent yours yet?

The voucher scheme was raised of course, and Cllr Lily Bath yet again showed that Hounslow Labour had completely forgotten the purpose of the funding behind it: a £2.3m grant from HM Government to boost local business. Cllr Bath stressed its value as a financial support scheme to residents struggling on benefits or in low paid jobs. We know that and we welcome that.

The difficulty is that others feel guilty about spending it when they don’t need it. The Conservative Group supports the scheme; please spend it anyway. Buying something you wouldn't otherwise have bought will boost business. And our businesses need it even more now, with new COVID rules making their business success even more uncertain. The list of businesses keen to receive your vouchers is here.

The deadline is 24th December! 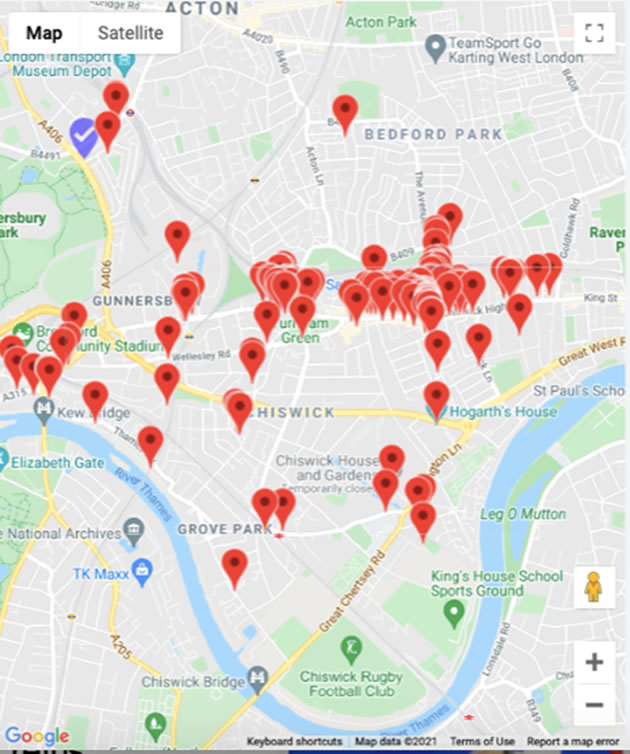 Fishers Lane – last chance to comment on the consultation

The four Chiswick wards have all been affected by the summary closure of Fishers Lane by the Labour controlled Ealing Council. The consequence of such closures led to the removal of Julian Bell as Labour Leader, but as yet no change in policy. The Labour Leader in Hounslow is on record as confirming that the position will not be altered. However under the new leader in Ealing the authority has been forced to go for a consultation. The consultation run by Ealing council, which is responsible for its closure at the junction with South Parade, ends on 15th December. If you want to comment please email trafficnotices@ealing.gov.uk

With regard to Chiswick High Road and surrounding roads, your Chiswick councillors in Homefields, Riverside and Turnham Green have been active in assisting TfL in creating appropriate consultations on the further extensions of the Experimental Traffic schemes. The consultations will take place after the May 2022 elections. The amount of money spent and probably wasted on these unwanted schemes is breath-taking, now equivalent to more than £40 on average for every council taxpayer in Hounslow; whilst TfL is facing bankruptcy and the Mayor of London ramps up further schemes, what drives this madness?

COVID-19 and Omicron - My experience in Health Care Management

Just as our retail, hospitality, health/well-being and service businesses thought they would have a chance to recover some of their losses, Omicron now threatens their busiest time of the year. This variant is much more worrying to us health professionals than we thought. Elective surgeries are being cancelled, cases are rising in parts of the country, doubling every two to three days and adding pressures on an already stretched healthcare system. Half of all new cases are expected to be the Omicron variant in the next two to four weeks.

This week the government moved to Plan B which came into force on Friday, 10th December with the mandatory use of face masks at indoor public venues, cinemas, theatres and places of worship. Plan B also advises people to work from home, where appropriate, from 13th December. Also, NHS passes are required for nightclubs, standing indoor events for more than 500 people and unseated outdoor events for more than 4,000 people.

It is now time to be vaccinated if you haven’t been. This will go a long way to protecting us all and preventing the NHS from being overwhelmed this winter. Complying with Hands, Face and Space is now more important than ever.

It was my turn to do the Chiswick surgery last Saturday, an opportunity for residents to speak to a local councillor. I was delighted to meet residents and consider issues of concern to them. Usually, the pace slows for councillors as we run up to Christmas but, if anything arises, do get in touch.

I hope you have a very Merry Christmas and see you in the New Year.