Dealing with an Unresponsive Council and a Night Prowler

Nine weeks seem to come around quickly – it's blog time again. What’s changed in Chiswick since my previous blog?

Not a lot. The traffic problems persist. The temporary traffic lights on Chiswick High Road did not work again on Friday. Long queues and more pollution to add to these dreadful Streetspace schemes. Wondering if your council is listening to you? Well, no, it takes no notice and it will not reverse the schemes that do not work, unlike other sensible councils that have listened and reversed unpopular schemes . Failure should be acknowledged but it doesn't happen with this council.

Listening to the cabinet meeting on Tuesday evening was depressing. Though the main offenders – Cllrs Steve Curran, Hanif Khan, Katherine Dunne and Guy Lambert – said they would take the recommendations of the overview and scrutiny committee meeting into account, they were quick to contradict themselves. They do not accept that they have made a mistake and should reverse the schemes in full and hold a full and proper consultation, overseen by a Market Research Society approved company. The council’s reputation is at stake but those in control will not budge. Even when requested to resign by one of their own.

Now they say they will engage with the community and in a variety of ways, including writing to all residents to outline their plans. Sounds like the council has been caught with its pants down. The schemes were brought in in a hurry, without due care and attention. It's easy to blame the government for bringing in the measures, but the government asked councils to consult, especially with businesses, and has shown that schemes should be put right immediately if they don’t work. Just as Secretary of State Grant Shapps did with his own hometown of Welwyn.

LABOUR IS NOT LISTENING! The council’s primary duty of care to residents is in question. As I would have said during the motion of no confidence at borough council, if Labour hadn't cut short the debate, the leader of the council should be responsible for the whole borough, not just the red parts but the blue ones too. Do not treat Chiswick as a cash cow.

Chiswick councillors are left to learn the plans of the council through the council’s social media posts. Why doesn’t the council inform its respective ward councillors before publishing press releases? Does it have no respect for others who were elected democratically and who are accountable? Does it only listen to its cronies? Cllr Khan's repeated mantra that he will not listen to the loudest (a script taken directly from others' briefings, and I am sure you know who I am referring to) is unconvincing. As councillors, we know that loudest means the majority. Instead, the council follows the wishes of a minority. Is this how consultations are to continue to be carried out? I fear it is.

KEEP WAITING, RESIDENTS! is the motto for this council. Residents can keep complaining but we, the council, will not accept we have made a mistake. Keep waiting for a review. "We know best, " is always the answer.

The Chiswick Flower Market last Sunday was well attended with over 6,500 residents and visitors passing through the appointed entrances. I was on the main entrance at Linden Garden s for three hours, clocking in everyone passing through. It was cold and wet to start with, but it got brighter as the day went on. The cold never subsided but there were quite a few gents in shorts and t-shirts and a cotton top. I am not so weatherproof and wrapped up. Mask-wearing and hand-sanitising at the entrance to the market was mandatory. There was a very good level of compliance, pretty well 100% from visitors to the market via the front entrance, less at the Devonshire Road entrances. As with all events, there are always a few who will not comply or agree with the existence of the market. I respect their view. 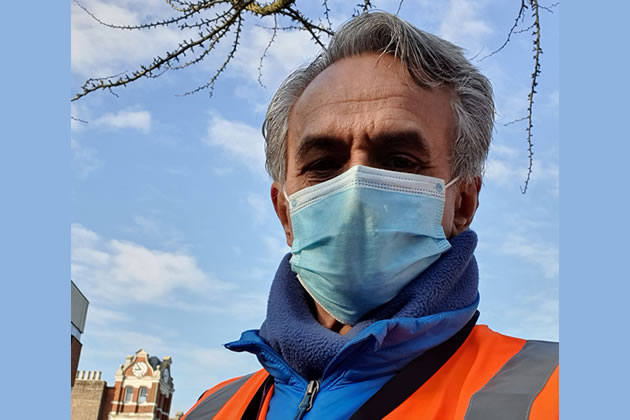 There were plenty of volunteer marshals throughout the day, including two Turnham Green ward councillors, all working extremely hard. The weather did not deter Anette from Chateau from serving warm mulled wine to all volunteers. A real treat in the cold. Anette was also busy with coffee orders and insisted on bringing me my coffee while I was at my post. What great service. Thank you, Anette and Chateau! Local businesses in the immediate vicinity were busy and it was great that the market attracted so many to come out to the market and to visit local businesses. I hope visitors to the market also visit other traders in Chiswick, not just those close to the market. 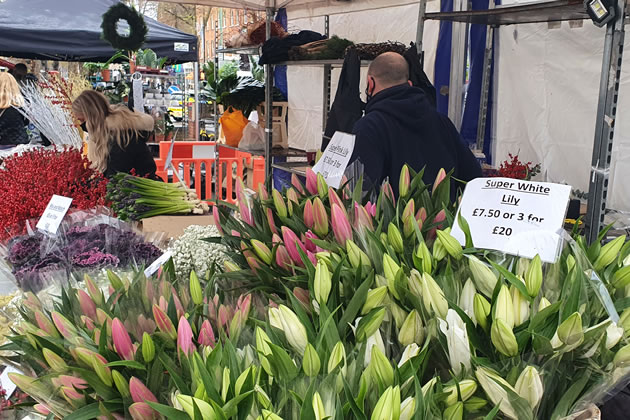 There is an application for a cheese and provisions market for the other two Sundays (the third and fourth) a month.

Being a councillor is meant to be a part-time role and I've been surprised by how much more we do, working on campaigns and of course on casework. It is, of course, what we were elected to do – to take up concerns and problems, to serve our residents. I am so sorry, as we all are, that I have not been able to knock on doors to meet residents or hold face-to-face surgeries. Changes to roads is still a hot topic for all residents and councillors. Let us hope the council will resolve the concerns raised by residents of Linden Gardens about parking and access and exit to Chiswick High Road. Social housing is an ongoing issue and one case I have been dealing with has been going on far too long, involving the police as well as the council.

All three Turnham Green ward councillors attended this discussion on Tuesday, organised by the Ealing Southfield ward councillors. The views were very similar to those of residents of Hounslow’s three Chiswick wards. After all, they are just as much a part of Chiswick. Council and ward boundaries are irrelevant (except for councillors). Fisher's Lane was not the only road discussed. Turnham Green Terrace, Devonshire Road, the High Road and C9 featured heavily in the discussions. It was interesting to hear so many say they walk, cycle and drive – a point Hounslow council still won't recognise.

A few weeks ago, I had an awful nightmare at 2 am. I heard a rustling noise at the bottom of the bed. As I am having some renovation works done, the whole downstairs is gutted so there are many boxes and bags of stuff in my bedroom and upstairs generally. I had forgotten to close my bedroom door. First, I thought it was a rat, but the noise was too loud. I turned on the table lamp but could not see anything. I jumped out of bed and stepped out of the room, gingerly turning on the overhead light. No sign of anything.

Suddenly a head popped up at the bottom of the bed. Boy! I nearly had a heart attack. It was a giant, glorious, colourful fox. I could not believe my eyes and had to blink a few times to make sure it was not my imagination. It then disappeared under the bed. I jumped on the bed and realised it was in the corner of the room next to all the paintings I had brought upstairs for safekeeping. I tried to shoo it away.

Realising I was standing on the bed with nothing on, I quickly got dressed so I could get this creature out, rather than keep awake all night. I grabbed a stick to try to push it out. Its screams and noise were bad – we have all heard that sound – but I'm not sure who was more scared. It came out, went along the other side of the bed and jumped onto the other side table, breaking the large glass dome housing a selection of antique stuffed birds which my partner, Peter, had bought about 30 years ago. So much for me keeping that safe from the builders.

Anyway, I had to find a solution so went downstairs, opened the front door and the porch door to make the fox’s exit simple and easy. Of course, by this time it was frightened and had peed all over the duvet. Anyhow, I managed to get it out without hurting it and it took a lot of nerve to do so. On its way it tried to go into another bedroom which had boxes stuffed in the doorway. I lost sight of it for a moment so had to look for it in that bedroom then went downstairs. I noticed the porch door had blown shut so panic raged again. I checked downstairs – no sign of it. I looked into the new downstairs bedroom, bathroom and kitchen. No sign.

Wondering where it had gone, I returned to the new bathroom and saw a gaping hole in the floor where the waste pipe is. So that was its entry and exit point. I was not best pleased with the builder. Then of course I had to get rid of the duvet and look for something else to sleep under (luckily it was only on the duvet and not the bedding or the bed).

Although it was a horrible and frightening experience, it wasn't as bad as when I was on Aerolineas Argentina en route to Buenos Aires and coming into Sao Paulo in the morning for a refuelling stop when the 747 was struck by lightning and the radar was lost OR on the Indian Airlines flight from Kashmir to Leh, when the back door seal on a 737 gave way!

Area forums have started to take place again and our next one will be on Tuesday, 12 January. It will include a question and answer session. Cllr John Todd will chair the meeting.

I take this opportunity to wish everyone a Merry Christmas. Let us hope we don’t go into Tier three first … I am so pleased that the vaccine is being rolled out and priority given to NHS staff, the elderly and vulnerable.