A Week in Chiswick When Decades Happened 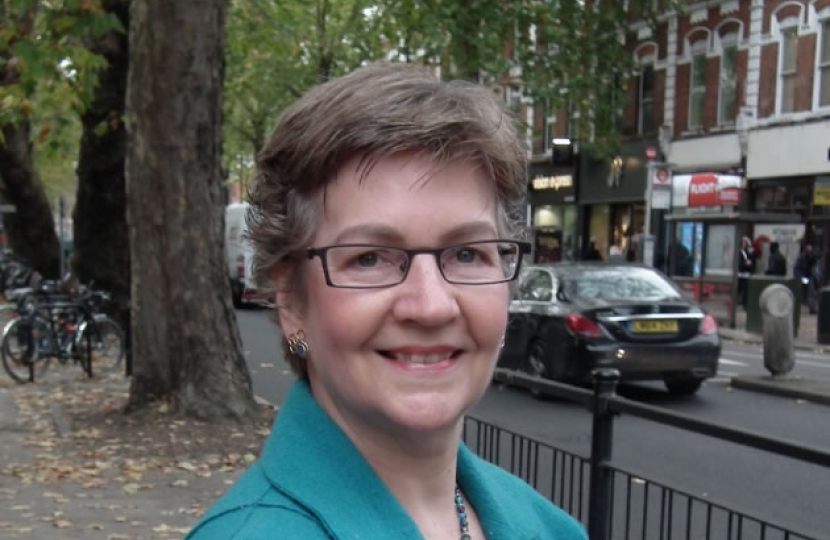 As the saying goes, there are decades when nothing happens and there are weeks when decades happen. And so it has been this week, here on my laptop and phone, and via MSTeams and Zoom. When I bumped into Cllr Guy Lambert, Hounslow cabinet member for highways, on a Saturday a few weeks ago and lobbied him about the Thames Water works on Acton Lane, he reminded me that being a councillor is a part-time role – then pointed at me saying it should be a part-time role for me, too.

All nine of us in Hounslow's three Chiswick wards are busier than ever before – these punitive road access and parking changes have resulted, quite rightly and wholly understandably, in floods of emails and all must be read, acted on and responded to. I know I have missed some and everyday track back to pick up on residents' requests but it's still work in progress. If you are waiting to hear from me, please either email again (especially if it is urgent) or know that I will respond as soon as I can.

I am in awe of the team that is OneChiswick, a group of residents who have come together to champion the residents' response to the road changes. The 'Hounslow Council is Destroying Chiswick' flyers they delivered through letterboxes, and the similar posters you'll have seen in shop windows, come from them. I assure you I am smiling when I write that it's due to the flyers that our workload has increased. When I receive an email sent to a familiar stream of names, I know the sender has had the flyer and acted on it. The flyers still apply so do stick them up – and act on the suggestions on the back. There are stacks of them in several shops that remain open during Lockdown Two including Chiswick Pets on Devonshire Road, Outsider Tart on the corner of Chiswick Lane and Chiswick High Road (CHR) and the newsagent at Turnham Green tube station. 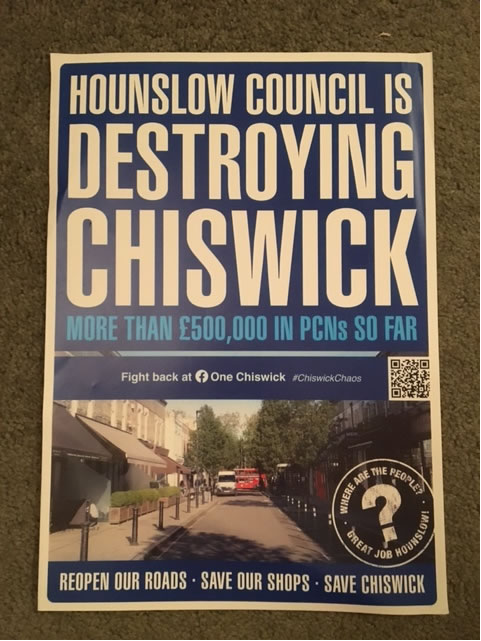 It is the work of the OneChiswick team, too, that has led to an application for judicial review of C9, the disastrous version of Cycle Superhighway 9 (CS9) that is being rammed insensitively along Chiswick High Road, taking out a bus lane so that traffic is blocked whenever a bus stops for passengers to get on or off; often buses have stopped anyway, stuck in gridlock nowhere near a dangerous floating bus island. Whoever dreamt up this method of traffic management has never been on a bus on a busy high street and certainly not on a busy high street that has as many buses as we do. Whose bright idea was it? Oh, yes, the unelected, undemocratic and unaccountable TfL.

TfL demonstrated all three of those traits at the Chiswick Area Forum on Tuesday; more of that later on. I still need to consider people power …

It was members of the OneChiswick team who saw the need to help drivers appeal against the PCNs they had received for travelling through Turnham Green Terrace (TGT) and Devonshire Road – soon it will also apply to Fishers Lane. They set up an informative appeals website. Hounslow remains in denial about the appalling signage, still citing that the signs are legal.

That's not the only point. Drivers who for decades have driven along TGT have no reason to look in the wrong places for no right turn signs (or whatever) and I've said repeatedly that very few people understand what "access" means especially as TGT and Devonshire Road enable us to access our homes, as cabinet members and officers would know if they lived here which they don't (cue Cllr Lambert saying he lived in Chiswick till "around 2008" though not off either Devonshire Road or TGT). If you have driven through unaware of the changes, been caught on camera and have received a PCN, you can get advice on how to appeal through the appeals website. The team has heard some heart-breaking stories about people in very straitened circumstances, and others, who did not see the signs or did not realise the nuance in the term "access". All, rightly, feel wronged.

People power goes beyond OneChiswick to the many thousands of residents and our local retailers who have demonstrated their strength of feeling by signing petitions, displaying posters and flyers in their windows and, as I said above, emailed. This response – including the support of high profile names such as Virginia Ironside – has been instrumental in getting LBH to admit it has got it wrong with TGT and Devonshire Road. Anyone else fearful that, in making changes, they might just make another big mistake?

People power doesn't only mean lobbying for change. It also means helping our traders keep going through Lockdown Two. Trade is abysmal compared with Lockdown One. I know one café owner whose day's takings was one grab and go coffee. Grants this time round are smaller and eligibility more complicated and less certain. If you can afford to order out, please do.

If you can't, please don’t stoop as low as one local cycling campaigner who, in a fit of pique reminiscent of a childish tantrum, posted Tweets of shops he will be boycotting because they display one of the 'Hounslow Council is Destroying Chiswick' posters. This sort of backlash – boycotts, the fear of bricks through windows – and concerns about relationships with LBH (on whom traders depend for licences, planning applications and more) are why some shops aren't displaying posters. Just because you don't see them doesn't mean they disagree. They all deserve and need our custom and, yes, that is a message from the Chiswick Shops Task Force team.

Where does the balance lie?

I am heartily sick of the cycling lobby's mantra about unnecessary journeys and the fact that most journeys are under 2k, or is it 3k, and so could be more easily done on foot. How do they know what our journeys are for?

As I said at the Chiswick Area Forum on Tuesday, huge numbers of us live so close to the shops that walking is all we ever do. TfL’s own data shows that cycle use in Chiswick is in the top five per cent of recorded use in London and is the highest in outer London. As one resident put it, we do not need encouragement to cycle, we have been doing it for years as the statistics show.

Regardless, the other side of the argument has tried hard to position itself as the silent majority, citing a poll by Greenpeace/YouGov which found that many more people like low traffic neighbourhoods (LTNs) than those who don't. It all depends on how you ask the question, and there is more to be said about that in another context another time, so I'll just leave you with this witty Tweet which explains the point: 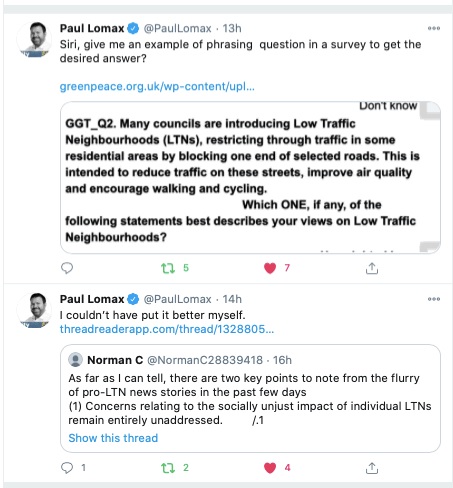 No-one disagrees with the sentiment emailed to me about the need to change behaviour to tackle the climate emergency, "we are all invested in a better way of living for everyone, but this isn't the right solution".

Many more people are converting to electric cars. Commercial and public sector vehicles are being replaced. Huge numbers of us make decisions about when to drive consciously and deliberately – not frivolously as LBH and the cycling lobby assumes. Why should we send people living north of the tube line who need to take heavy gardening tools to their allotment in Grove Park on long diversions, churning out more pollution as they sit in congestion? Or retired golfers with heavy, bulky golf club bags for whom playing golf keeps them fit physically and mentally? Or carers taking hoovers and cleaning equipment to clients' homes? Or ill people trying to get to medical appointments? Or any of us doing a big shop at several shops in one go who take pride in our unique retail sector and want to support it so Chiswick retains its shopping destination reputation? Clipping our wings in such a brutal, ill-informed way is no way to manage change, as my fellow councillor Gabriella Giles said so powerfully during the Chiswick Area Forum last Tuesday.

A lot of work goes into this in normal times. With Streetspace road changes on the agenda, and over 200 questions submitted in advance, there was even more to do. You can watch the whole thing, complete with smug eye-rolling, attempted Powerpoint filibustering, and non-answers all overlaid by some essential firm chairmanship from Cllr John Todd, on the Hounslow YouTube channel.

The week before's big event, and the debate on our motion of no confidence in council leader Steve Curran, is also now on the Hounslow YouTube channel.

The debate was brought to an early end by Labour councillors moving early to the vote. Here's what Cllr Ranjit Gill would have said if we hadn't been cut off/

Overview and Scrutiny Committee to scrutinise the Streetspace programme

In an unusual coincidence, two call-ins have been filed and accepted – Cllr Richard Eason and our own Cllr John Todd have called-in the cabinet's decision on the streetspace programme. Do tune in. The agenda and joining instructions are here.

Waiting for a bus?

Finally, there is no hint of irony – or understanding – in this poster at one of the bus stops on Chiswick High Road. With gridlock and longer journeys, haven't we all got time for a cuppa while waiting for a bus?

Apologies for the long blog. It's been a decades-long week.